Snake repellants are products designed to deter serpents and keep them away from protected property. They can be sprayed or sprinkled around the property, but some can come in the form of sonic repellants.

A fact that everybody knows is the some products are more effective than others. This guide will help you choose which one on the market works best for you.

How a Snake Repellant Works

Serpents often end up in residential and commercial properties looking for food and shelter. Most of them eat mice, slugs, and other rodents. This is one benefit, but snakes can be a problem due to the fact that they can bite humans or scare pets. To fight snakes, several companies have developed snake repellants.

A lot of products that repel snakes actually have Naphthalene. This is a chemical sourced from black walnut trees and can be very dangerous since it can cause retinal and nerve damage. Naphthalene smells like mothballs and it is believed that snakes find the smell unpleasant.

That being said, there is a safer alternative to Naphthalene-based snake repellants. Some companies use essential oils such as clove, peppermint, castor, cinnamon, and other oils that are strong smelling.

Chemicals have strong scents and they are very effective in deterring snakes. However, snakes don’t usually use their nostrils to pick up a scent. Snakes are known to sniff at an object they find interesting and flick their tongues. It is the tongue that picks up odor particles that the snake senses using the special organs in their mouths. These organs are called vomeronasal organs. Certain chemicals can hurt snakes and are toxic to them, meaning they will avoid areas that have these chemicals.

As for sonic repellants, they can produce noise at a frequency that only snakes can hear. Snakes can only detect the frequency and the noise is irritating and unpleasant to them, so they will avoid entering a property affected by the sonic repellant. 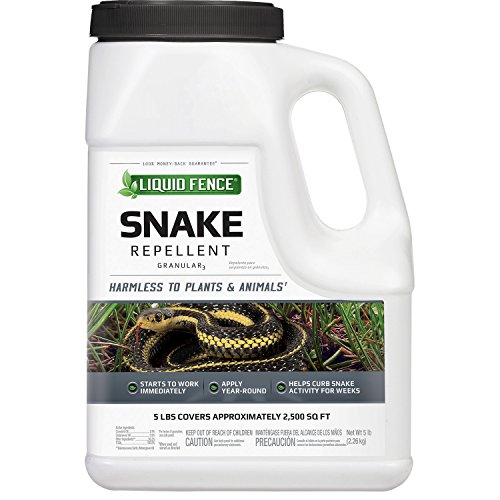 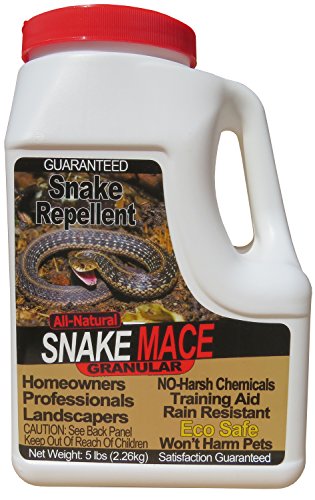 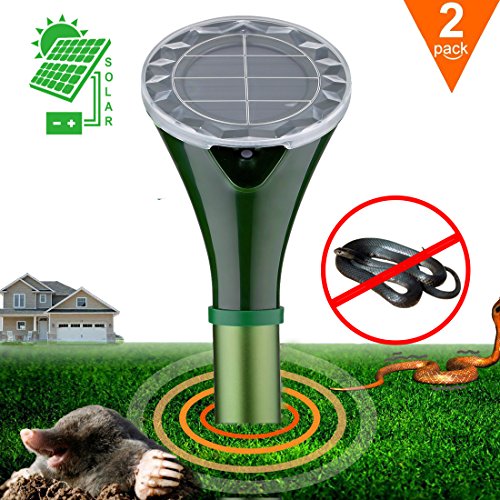 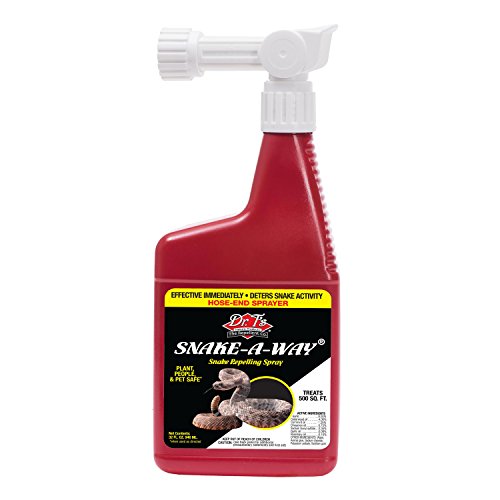 The Liquid Fence Snake Repellant has granules that block the keen sense of smell or taste of snakes, deterring them from areas that are treated. This is a fast-acting product and works immediately to help stop the activity of snakes within the area. You can apply it all year round – simply shake the granules in your yard or garden, backyard perimeter, or patio.

What’s good about this snake repellant is that it’s safe to use around children and pets. It will not harm animals or plants when used and stored in accordance with manufacturer guidelines. This doesn’t contain naphthalene. Five pounds of granules can cover up to 2,500 square feet.

Nature’s Mace is a rain-resistant snake repellant, meaning you can use it all year round. It does not only stop the activity of snakes and prevent them from entering targeted areas, but it also trains them to avoid such places permanently, especially if that area has been treated multiple times.

The ingredients in this snake repellant act as an irritant to snakes and can be used in landscaped areas, lawns, and gardens. The manufacturer guarantees that this product works 100% in repelling stray snakes.

The Solar Silent Snake Repellant produces a brief variable frequency vibration. It removes not only snakes but also other underground rodents such as voles, gophers, and moles by producing vibratory impulse every 180 seconds transmitted through the ground, which means there is no risk of contaminating humans, animals, and the environment. The snake repellant must be used continuously for days before it starts taking effect. Eviction time varies as animal habits are different.

This product is easy to install. Simply insert it to the ground and make sure the top part is protruding at least 40 centimeters high from the ground. When used for the first time, turn the device off completely for 3 days to charge it via sunlight. This solar repellant has a weatherproof design and features solid construction. In the event of rains, remove the device from the ground and store it in a dry place.

The solar power of this snake repellant reaches all directions at a full 360 degrees up to 1200 square meters. It has a solar panel on top of the device that collects energy from the sun and stores it in a rechargeable battery. When fully charged, the unit can last for 6 days.

The Exterminators Choice Snake Repellant is an efficient and reliable product that it’s easy to use. It’s one of the more popular choices when it comes to snake repellants but users do note that this product is quite pricey.

This product can also be used indoors. You can spray it on your kitchen cabinets without the fear of causing harm or contamination. You can rest easy with this product because a simple spray will prevent snakes from entering your property. It also has a strong smell but your pets won’t experience any health issues, although they may avoid this product. While expensive, users commented that this product truly works in stopping snake activity.

Dr. T’s Snake Repellant Hose End Spray is a tried and tested product effective in repelling non-poisonous snakes, including corn snakes and garter snakes. The potent formula of this product can cover up to 500 square feet and deters snakes from areas around the house, flowerbeds, trash cans, wood piles, barns, garages, cabins, and more. It comes with a convenient hose-end bottle making it easy to apply anywhere and also easy to store.

When used as directed, Dr. T’s snake repellant works fast in driving snakes away without harming plants, pets, and humans. However, do not apply this product directly on crops and plants that are intended for consumption.

The powerful ingredient of this product temporarily disrupts the sensory receptors of snakes through its outer olfactory sense organ, which is also known as Jacobson’s organ. A sniff will disorient the snake, causing it to scurry away unharmed to search for fresh air.

How to Find a Good Snake Repellant

There are many snake repellants in the market and to find the most effective product, you should consider the effectiveness, strength, and overall cost. Below are the questions you should ask yourself when looking for a snake repellant.

The effectiveness of a product can be determined by how many snakes can be deterred by a single application. Note that not all products work on the same snake species, but there are some that actually works on a wide range of snakes. Some products can last for days, even weeks, while others need to be reapplied often and don’t last long.

There are repellants that can stand weather elements while others will stop working when there’s strong winds or rains. Some formulas also last longer than others, so always read the ingredients.

Is the Price Worth It?

Prepare somewhere between $10 and $60. The price depends on the ingredients and the construction of the repellant. Sonic and electric repellants will last longer so expect them to be more expensive than other variants.

Common Types of Snake Repellants on the Market

Electronic repellants are the most popular type of snake repellants being used these days, thanks to the convenience it offers. This type of repellant is subdivided into three smaller types: ultrasonic, vibrating, and electromagnetic devices.

This is by far the most common type of snake repellant, the one that smells of mothballs due to is naphthalene and sulfur content. Both chemicals cause snakes to be disoriented and unable to see or detect where they are and where they are heading. Eventually, the snakes will avoid these areas since they have lost their senses. Note that this type of repellant has a very pungent odor, so always wear a mask and put gloves on when handling these chemicals.

Snakes have been known to dislike certain essential oils. These oils can be used by humans but are offensive to snakes. Some samples are clove oil, cinnamon oil, and cedar oil. When you use these oils, expect the snakes to stay away from your property.

We all have to be quite honest about it – repellants may not work all the time. As their name implies, they can only repel, but it won’t physically stop animals from passing by or crossing.

When we tested out the products, we noticed that snakes had definitely sensed something they don’t like, causing them to slow down, but don’t expect them not to cross the barriers of your property. Snake repellants are best used as a part of a more sophisticated pest control plan meant to stop snakes from inhabiting your property.

As mentioned above, some repellants have chemicals in them that are toxic to some animals and to the environment. Naphthalene, albeit a strong and powerful repellant, can severely damage the nervous system. The EPA also considers this chemical as a carcinogen for humans.

These carcinogens cause an increase in the likelihood of people developing cancer. You can avoid getting in contact with naphthalene by using environmentally friendly repellants or sonic devices.

People will have different decisions when it comes to dealing with snakes. Some resort to killing these animals, while others simply want to deter them. All of the products above are effective in their own right, but our top pick goes to Exterminators Choice Snake Defense Natural Snake Repellent.

Yes, it’s quite pricey, but you’re not risking children, pets, and the environment when you use this product. It’s also environmentally friendly and is made of natural ingredients. The spray application offers a lot of convenience to users and ease of storage as well.

In general, users have good reviews of Exterminators Choice. Simply spray this product on the area you want snakes to avoid and it’s a guarantee you won’t see a single snake, venomous and not. This repellant has a scent, but it’s not too strong to cause disturbance or annoyance.

Take your pick on the products we reviewed above and tell us your experience. 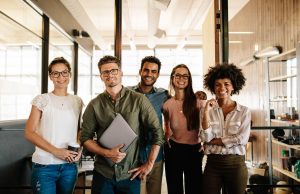