Practically everyone has a pair of scissors in their kitchen that they use for almost everything. But since these scissors are used for everything, they only maintain their sharpness for so long, and then they don’t work as well. Even after scissors lose their sharpness, most people simply throw the old ones away and purchase new ones.

This isn’t only a waste of money, but it’s also super inconvenient having to run to the store all the time. Because of this, you should consider purchasing a scissor sharpener. Scissor sharpeners are classified as simple devices that have the ability to sharpen either your scissors or other sharp accessories in your house using a variety of methods. Most devices sharpen knives or scissors by having two stones next to each other and they sharpen the blade as it goes in between the two stones. Other devices can be more complex with multiple stones that rotate.

Before deciding to purchase a scissor sharpening device, you should consider a few things first. For instance, you’re advised to consider the quality of the device. The higher the price of an item typically means it’s made with higher quality. And lower quality devices can even damage your knives or scissors.

In addition to this, you’re also advised to consider the type of material that the scissor sharpening device uses to sharpen blades. Scissor sharpening devices either use carbides, diamond flecks, steel, or ceramic sharpeners. Both carbides and diamond flecks are more expensive and they use less friction when sharpening blades. On the other hand, steel and ceramic sharpeners are mostly used for honing blades instead of sharpening them, which means that they are more focused on cleaning up the blade’s cutting edge.

Most sharpeners on the market contain both honing rods as well as sharpeners, so you’re advised to consider that when shopping for a sharpening device. Generally, the more you use scissors, the duller they get. So you should consider buying a scissor sharpening device, like the ones listed below. 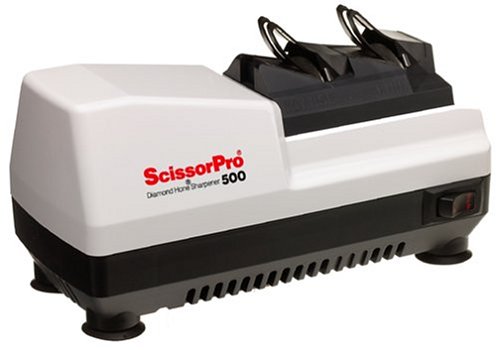 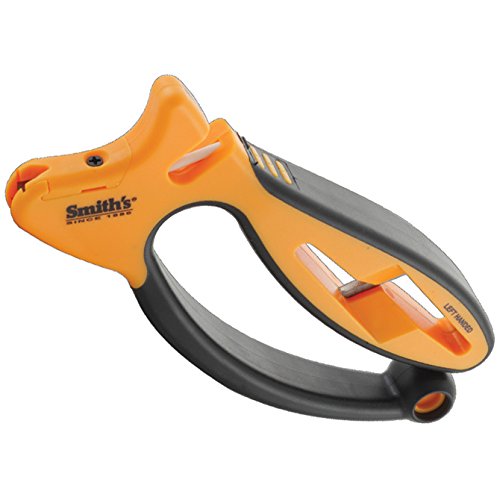 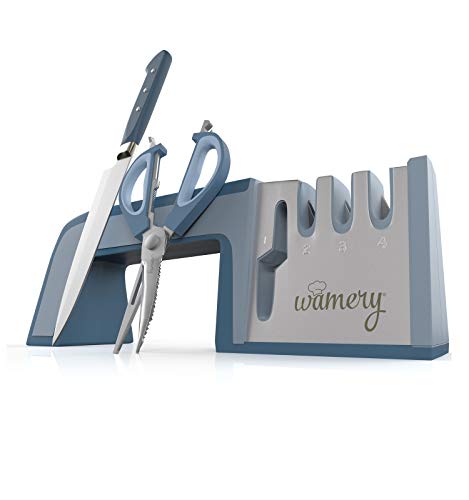 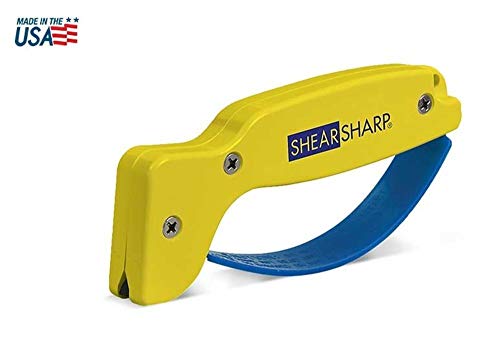 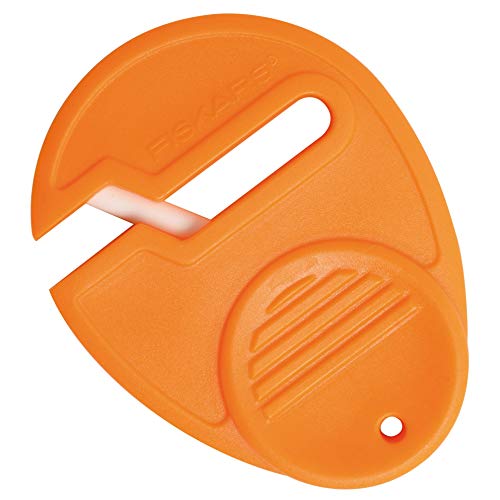 This Chef’s Choice 500 ScissorPro Scissor Sharpener is highly recommended for you because it is an electric, professional scissor sharpener that has a 2-step process. This device contains diamond abrasives that have the ability to sharpen the blades on your scissors using a conical disc, and it even has the capability to clean up the blade’s cutting edge as well, which is a feature that the rest of the products on this list don’t offer.

This scissor sharpener also contains patented Magna-flex technology that is responsible for combining magnets and springs in order to control the angle at which the device sharpens at. No only this, but this device also has the ability to accurately sharpen the blades on your scissors because it presents technology that can apply the correct amount of pressure and stabilization to any blade.

This Smith’s Jiffy-Pro Handheld Sharpener device is highly recommended for you because it is crafted from the highest quality of materials from the Smith company. This device is specifically built for high quality performance as well as maximum durability. This device presents blade sharpening slots that have carbide blades at crossed angles to sharpen your blade to the sharpest quality.

This handheld sharpener is recommended for you because it can be used for a variety of purposes, including outdoors, in a workshop, or in your kitchen. Not only does this handheld sharpener have carbide blades, but it also contains ceramic rods that are responsible for honing the final edge of your scissors or knives. This sharpening tool uses a floating carbide that has the capability of adjusting to the bevel of the blades of your knife or scissors.

In addition to all of this, this blade sharpening tool has the ability to remove metal in places where it’s not supposed to be, which essentially repairs the damaged straight edge blade. In order to use this device, you are required to pull the blade through the sharpening slot at least 3 or 4 times. This device is convenient for you to use because it contains a rubber handle in order to provide you with an easy, comfortable place for your hand to grip the device during use.

In addition to all of these features, this sharpening device is also extremely durable, since it’s made out of stainless steel material and contains a rubber handle. This device uses diamond abrasives to sharpen the blades on either your scissors or knives, which has the ability to sharpen your blades to the maximum sharpness possible.

You are highly recommended to purchase this AccuSharp Shear Sharp Scissor Sharpener product because it is crafted from high quality materials that are built for maximum durability and to provide the best performance possible. More specifically, this device has an ergonomic handle that makes it extremely safe and easy to operate. It also contains a full length finger guard that has the ability to protect your fingers.

This device uses Diamond Honed Tungsten Carbide blades and has the ability to lengthen the lives of your scissors by sharpening them to the best of their ability. Not only this, but the device can be cleaned with soap and water, or it can even be placed in the dishwasher without you having to worry about the device rusting. 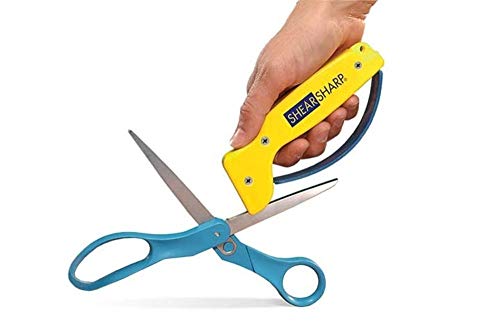 This product does not contain any oils or stones, since it only includes a tungsten carbide sharpener.

This Fiskars SewSharp Scissors Sharpener device is highly recommended for you to purchase because it contains a ceramic rod that has the ability to restore the sharp edge to any pair of scissors that you have in your home. In order to sharpen your scissors while using this device, you should place the blade of the scissors into the sharpening slot and pull the blade through towards you a few times. Make sure that your scissors are facing upward, and you should only apply gentle pressure in order to sharpen the blades on the scissors.

This product contains plastic slots that ensure proper positioning for your scissors to receive the sharpest blades possible and restore their quality to act brand new. Not only this, but the device is compact and convenient for you, since it’s small and portable, so it can be placed in any location in your kitchen. 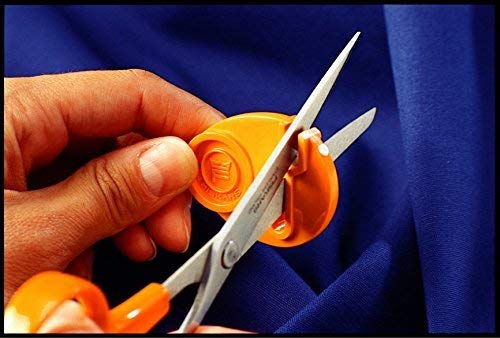 Given its small, convenient size, you can also take this scissor sharpening device anywhere with you on-the-go, so you can sharpen scissors anywhere that you have to.

Scissors are essentially contraptions that are composed of 2 knives held together at a connected rotating point. And you can use a scissor sharpening tool to sharpen the blades of the 2 knives in the contraption. Scissors are convenient and can be used for a variety of purposes. For instance, scissors can be used to cut fabric, string, paper, cardboard, plastic packaging, or any other type of substance that needs cut.

As you use scissors over time, the blades in the contraption become weak and dull, which essentially renders them less useful for your purposes. Most people simply buy a new pair at this point, but that is unneeded if you purchase a scissors sharpening system, since it essentially makes the blades on your scissors like new.

Scissor sharpening devices provide you with a wide variety of benefits, like the ability to cut things more easily makes scissors safer to use. Some of these devices also have the ability to sharpen knives, so it can make your kitchen knives last longer.

Given all of these benefits, you are advised to purchase product #2: Smith’s Jiffy-Pro Handheld Sharpener. This sharpener is highly recommended for you because it provides you with a wide range of benefits at a convenient price that’s cheaper than some of the other products on this list. Not only this, but this product is handheld and can be used for a wide variety of purposes, like sharpening both knives and scissors.

This Smith product can be taken anywhere with you on your adventures outdoors as well as in the kitchen, since it can conveniently be clipped onto your backpack or even your belt. Because of the wide range of benefits that this product offers, you should check out this product on Amazon.

How Long Does It Take to Sharpen Your Scissors?

Do Scissor Sharpeners Work on Knife Blades Too?

How Often Should I Sharpen My Scissors or Knives?

Recommendations For Books to Learn Spanish