Home » Best » What Are The Top Dinosaur Costumes?
BestHobbyLeisure

What Are The Top Dinosaur Costumes?

Let’s get this party started right! Nothing injects life into your next party like a costume. They’re fun to wear and entertaining for guests, making them the ultimate ice breaker. You get to step out and be something you’re not for a night, and the more you stand out the better.

One themed costume doing this in new ways is actually old school, and I do mean old. We’re talking prehistoric. Welcome to the world of dinosaur costumes.

Dinosaurs are enormous and yet mysterious creatures. We haven’t seen them alive, so they bring up all kinds of interesting questions. What are they like to talk to? What’s their favorite beer? You have the chance to answer these profound questions and many more.

And walking around in a full-length, extra tall costume in a room full of people holding champagne glasses creates just the right surreal feeling. The absurdity will put your party at a whole other level.

An important factor to keep in mind when buying any costume is quality, and this is especially the case here. If you’re going to be a dinosaur, do it right. Choosing well means you will look good throughout the night and not like you’re just survived a car wreck. 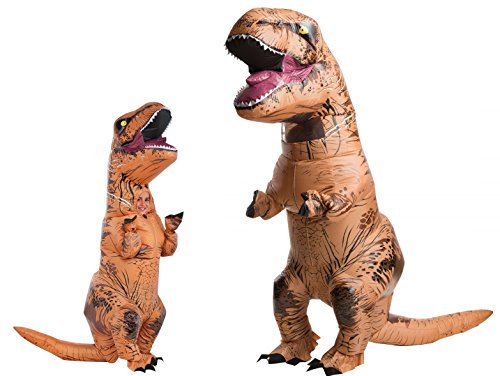 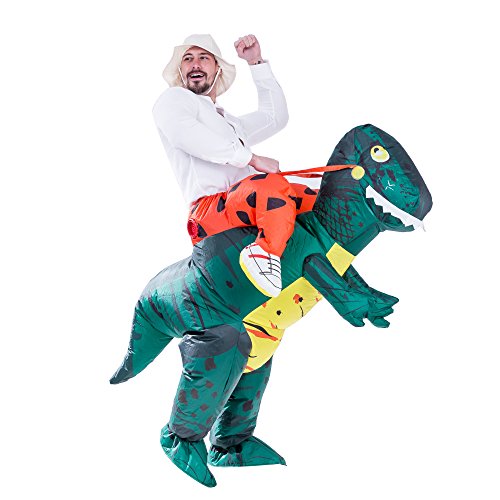 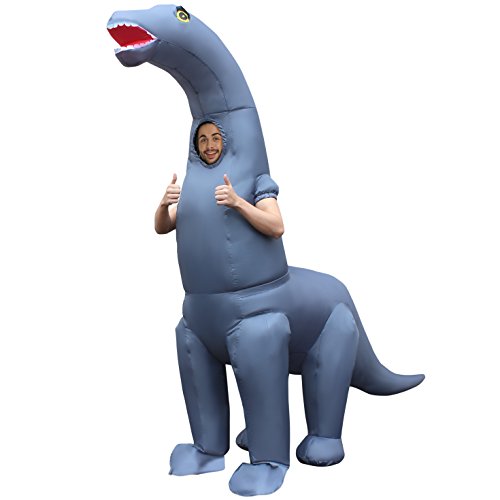 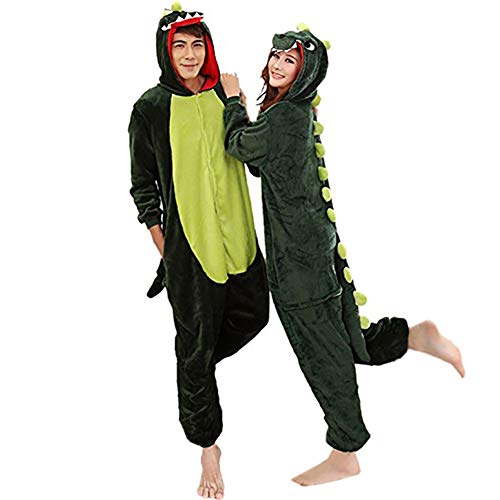 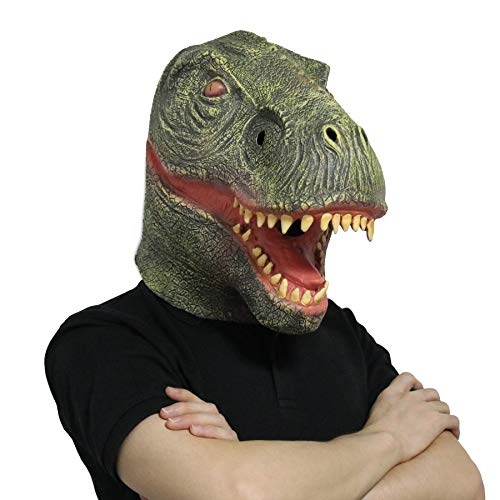 This Rubie's Costume has many, let’s say, unconventional characteristics that make it one of the top five. To start, this costume is award-winning. That’s right. It won a Toy of the Year Award. For this reason, we recommend viewing the YouTube clips this costume has appeared in; these hilarious clips show people wearing this realistic costume while doing mundane chores.

This product has the added bonus of being an authorized Jurassic Park costume. With the Jurassic Park franchise's stamp of approval, you can be sure that this costume will be better quality than most.

Oh, but wait, this dino gets even better. It roars! There is actually an on-board battery-operated roaring machine for endless hours of entertainment. Just imagine saying hello to your friends at your next party.

The costume is designed to cover you from head to toe to create a more authentic aesthetic. In addition to being one of the more realistic dinosaur costumes, this item is well priced.

The seller offers a range of "species" to choose from, such as a T-Rex (with or without sound), a Triceratops, or a Velociraptor (with or without sound). Pick your favorite! You can also encourage your friends to buy some of the other styles for a unique themed party. Once you click the link you'll notice that this particular model comes as a standard size, so be sure to review it to understand the measurements.

It requires 4 AA batteries that are not included. We recommend wearing the costume out to pick up some batteries… for no particular reason.

What would we do if dinosaurs were alive today? Duh. We would ride them! At least the friendly ones. Now you can ride a dinosaur with this Spooktacular Creations Inflatable Dinosaur Costume.

This costume is forgiving in its ability to let you move around freely. There's no need to worry about bumping your head or knocking things over. You also have the freedom to hold food and drinks more easily than the previous costume. Your head is out in the open, keeping you cooler and breathing easier.

This is a great choice for Halloween, but it also works for any party any time of the year. If you chose the theme pictured above, you are an explorer out for a ride. Where? Wherever you want. The explorer theme comes complete with your very own explorer hat.

It is also a one-size-fits-all design. This is great if friends or family want to borrow the costume for their next party.

This Inflatable Dinosaur Costume is a taller costume and comes with the option for headless model if you prefer to have more room. As with some of the other options on this list, this costume might shock some of your friends with its playful styles, colorful prints and large size.

One of the best features of this costume is that it has an open hole for your face and arms to stick out; you will have even more freedom to move, talk, and eat.

You have a variety of themes to choose from, such as the Diplodocus and the T-Rex. You can even choose the skeletal version of a T-Rex for added spookiness at your next Halloween party. Or, if you're feeling adventerous, try the explorer version, which is called “Dinosaur Ride On" and features a rider atop a dino.

Who says being a dinosaur can’t be cute and comfortable? With a range of sizes for all genders, you and a friend can hit the party in the Aibox Adult Dinosaur Plush One Piece. This costume is made with a soft and cozy fleece and will keep you warm in the cold Fall and Winter months.

These fleece costumes are great to wear around the house, as an ultra-cute sleepover costume, or maybe at a funky festival. These are loose fitting and give you full range of motion, so you can be confident when you hit the dance floor. An added bonus is that this dinosaur one-sie features pockets, so you can also be functional in your loungewear.

Of all on our list, LarpGears Halloween Party Latex Dinosaur Head Mask will allow you the most flexibility in what to wear. By choosing either of the two head options, you can wear these masks with regular clothing. Bonus Halloween costume idea: use this mask to dress up as a creature in a Star Wars cantina.

The benefit of using a mask as a costume is that you can easily go to the bathroom. This simple costume is cost effective and won't sacrifice the overall effect. You may have some trouble drinking, eating, and being recognized.

It is made of 10% natural latex, is eco-friendly and is non-toxic. It is soft and easy to wear and you can easily see and breathe through the mask. This is a great option if you attend multiple parties throughout the year, even masquerade parties.

This list shows a variety of costumes to fit your preferences, ranging from simple to more complicated. Additionally, costumes might fit differently for different heights and body types, so make sure that you review each before purchasing.

With many of these products there is more than one style option available, which means you have a wide selection of styles to choose from.

We also have a Lara Croft costume review for those into Tomb Raider!

How much is a dinosaur costume?

It will depend on the place where you are purchasing it. Also, different sizes can also mean that the price might differ as well. Before ordering, make sure that the dinosaur costume that you want is in stock. If there aren’t any, search elsewhere online.

Adult dinosaur costumes can run anywhere between $20 to $60 on average depending on where it is sold.

How do you inflate a dinosaur costume?

Once you have zipped up the costume far enough, you can continue slipping on the costume as if you are wearing a jacket. Continue to do more zipping up if and when necessary. Attach the battery packs to your waistband. Attach the cords to each battery pack. Switch each of them on so the fans start up and slowly inflate the costume.

Lastly, slip your head through the top of the costume and apply the claw gloves on. Then add the head mask and enjoy. If you need to, stay in place until the fans have fully inflated the costume.

Why is the T-Rex so popular?

The tyrannosaurus rex of the T-Rex was considered one of the most feared of the dinosaurs. It was also one of the most carnivorous. During the existence of dinosaurs, the T-Rex and the triceratops were considered enemies. Thus, this “three-horned” dinosaur gained almost the same amount of popularity of the T-rex.

What made the dinosaur costumes so popular?

These dinosaur costumes are quite popular since they play a role in so many jokes and memes. There are plenty of videos on YouTube of people dressed up as a T-Rex and often shoot videos of various activities. There are plenty of compilation videos of people going all kinds of crazy things like playing sports, T-Rex races, and plenty of other activities that have entertained so many people who watch these videos.

How long do dinosaur costumes last?

If you are wearing a dinosaur costume, keep in mind that the battery packs will run on AA batteries. On average, the battery packs will last roughly four hours. If you are going out for trick or treating with the kids, it might be a good idea to consider bringing extra AA batteries if you plan on being out longer than four hours. The batteries will be easy to replace and you won’t have to worry about losing a lot of air when you are changing the batteries themselves.

Your costume will stay well-inflated even when you have the power shut off for a brief moment.

When ordering dinosaur costumes, it is good to evaluate what you will be doing that evening:

Best Rain Barrels – Which Is Right For You?